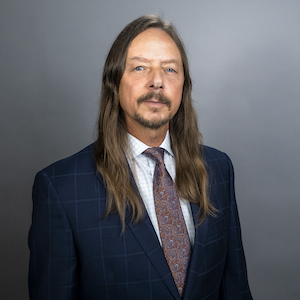 Thomas Hunter was born in Hampton Virginia into a close knit working class family. The son of a shipyard worker, Tom learned the value of hard work and excelled in both sports and academics. He attended the Marshall-Wythe School of Law at the College of William and Mary and Samford University’s Cumberland Law School obtaining a doctorate in 1985. Additionally, Tom earned the designation of Proctor in Admiralty and is a member of the Maritime Law Association.

During this time, Tom expanded his areas of practice into entertainment law, becoming a certified National Football League Players Association (NFLPA) agent, and starting his own sports firm, 4th and Goal Agency, LLC. In addition to his NFL certification, Tom is also certified to represent the CFL and Arena Football Leagues. Tom has served as the player agent for Adam “Pacman” Jones of the Cincinnati Bengals, Jeff Cumberland of the San Diego Chargers/New York Jets, James Davis of the Washington Redskins, Alex Daniels of the Oakland Raiders/Dallas Cowboys/New Orleans Saints, Josh Francis of the Green Bay Packers, and a long list of other players.

In addition to his law practice and entertainment law business, Tom is also the owner or co-owner of several real estate title insurance companies, including Victory Title, Inc., Governors Title, LLC, and Sovereignty Title, LLC.  For over 30 years, Tom’s brother has been a reputable custom home builder and real estate developer.  With numerous connections to the real estate community, Tom continues to be actively involved in the real estate department of Hunter Law Firm.  Tom’s competitive nature will not allow him to diminish his courtroom presence as he continues to litigate civil, criminal and traffic matters.  As one of the few fluent Spanish speaking attorneys in Tidewater, Tom proudly and zealously represents the Spanish speaking residents of Hampton Roads.

Tom continues to have extensive involvement in his community.  From 2001 to 2005, he was an Adjunct Professor at Thomas Nelson Community College teaching police officers criminal law as it applies to law enforcement.  After serving many years on the Board of Directors for the Hampton Bar Association, he was elected President of the Hampton Bar Association in 2016. He served for several years on the Virginia State Bar Ethics Committee.  He has also served on the board of the Lackey Free Clinic, and is still involved with this important charity as an active supporter.  Tom, a dedicated and devout Christian, has donated extensive service to his church in numerous capacities, including as a deacon, as a moderator of business meetings, on the constitution and by-law committees, on the pastor selection committees, as a Sunday school teacher and on numerous Christian mission trips to foreign countries.

An active big game hunter and avid tennis player, Tom can sometimes even be found with his brother and father in the wild lands of Colorado and other western states; or at the Hampton Tennis Center or Center Court Racquet Club in Newport News playing tennis with his daughter, son-in-law and others.

Tom has always devoted and abundance of time to his daughters and now continues that family tradition by spoiling his four grandchildren.

Regardless of whether the needs are legal, sports related, or community based, Tom continues his lifelong passion to help others.

To speak with Tom about your legal matter, contact him online or call one of our four convenient offices.